The 6 matches which took place over the weekend of 23rd/24th March 2013 at the ZIS indoor hall in Adliswil were competitive, entertaining and played at a high level with great energy. Four teams took part in the six-a-side competition and included two Colts teams, one from the west and one from the east of Switzerland, the local men’s club Winterthur CC, and Luxembourg. It was an excellent finish to the indoor season and gave the players a chance to compete against strong opposition before heading outdoors in April.


Most teams managed to take advantage of the six-a-side format to put runs on the board by pushing the ball into gaps rather than rely on muscle and brawn. Wickets were harder to come by and bowlers were forced to concentrate on keeping the run rate as low as possible. The indoor competition is doubtless a great test of players’ agility in the field and speed, in particular between the wickets. Cricket is a thinking game and no more so when batsmen must see that an innings is correctly paced, the field manipulated, bowlers targeted, and wickets kept in hand for the final overs. The tournament provided an excellent platform for these young cricketers to develop and hone these necessary skills.


The competition was won by Luxembourg. They played consistently well against two young Colts teams and Winterthur CC.

This year, between January 2013 and February 2014, much has taken place, much has been achieved by Zurich Crickets CC. Coaches, managers, our website manager, and our treasurer have worked hard to ensure the club runs smoothly and players enjoy their cricket. I am indebted to our committee members who put in so much work, week in week out, throughout the year.

At present there are just under 60 active members with the club. The players range in age between 6-18 years. There are still five age groups, although we could not field XI-a-side teams at the moment, with the exception of the U13s. Parents have continued to support the club enthusiastically during matches and tournaments and we are grateful for all their help with the many little jobs necessary to run a club of this size.

News about Zurich Crickets CC can always be found on our website www.zurich-crickets.ch. It has been kept up-to-date, thanks to our website manageress, and is a hugely important source of information not only for club members, but many others too in the Swiss cricket community. On average there are roughly 150 visitors each week. As many match reports from the different teams as possible helps raise awareness of how some of the teams are performing. In addition to the club website, TeamSnap has greatly helped with the organisation of team activities.

As a build-up to the outdoor season the club organised for its members our now traditional cricket development camp in Zurich with Hampshire coaches John Cook and Chris Wheeler in January 2013. A second Hampshire camp was organised again with John in May. This time he was joined by Graham Kinchington. The emphasis at these camps was more on the development of individual players, and the coaches who assisted with the sessions. This format proved so successful and popular with everyone that it was repeated at the camp run in February 2014.

The highlights of the year for domestic cricket were the three major indoor tournaments, Zuoz, and the Leman Cup:

• The Basel Dragons indoor tournament in March for the Under 11 (ZCCC 2nd), Under 13 and Under 15 teams

• The Gingins indoor tournament (ZCCC U15 1st) in November

The 2014 Basel Dragons U17 Indoor Cup has already taken place in mid-February. Our very young team did exceptionally well and came 2nd. The other age groups are scheduled to play in March and April.

Zurich Crickets CC’s Under 14 team toured to Surrey for four matches of cricket over the long Ascension weekend between 9th-12th May. The Surrey-based Twenty/20 Company scheduled some excellent opposition for Zurich Crickets, and the team made such progress that since then they have remained unbeaten in Switzerland.

Internationally ZCCC players did well in 2013. Seventeen ZCCC players were selected for the various national teams that toured to Cambridgeshire, Surrey, Sussex, Germany (Karlsruhe) and Luxembourg in 2013:

A Scorers Course in March and an Umpiring Course in April were run for ZCCC members, and a Coaching Level 1 course took place in Basel in April.

In September a ZCCC Open Day with Under 15 matches, competitions and excellent catering by our team of mothers took place for the first time and was a great success.

Bob Barber Awards: the Annual Swiss Awards for young players were presented by the Swiss Cricket Association in Geneva at the end of the season. ZCCC player Luke Specogna was recognised as the best U11 cricketer and received a Bob Barber Award.

The annual ZCCC Awards were presented this year at the Parents vs Players matches at ZIS Adliswil on December 7th/8th. Due to the busy schedule leading up to Christmas after the Gingins Indoor tournaments it was decided not to organise a dinner for this event in 2013. In addition to the annual awards, ten Baggy Caps were awarded to players leaving the club: Callum Hirst, Osama Mahmood, Henry Mackie, James Boakes, Timothy Langford, Dan Millar, Paulina Kratka, Simon Henderson, George and James Gaillet. The ZCCC Baggy Caps are awarded to those players who have been members of the club until they have at least reached the Under 15 level before leaving the club. They are seen as graduation-style recognition of long service and achievement at Zurich Crickets Cricket Club. They were awarded for the first time in 2012.

Many thanks to everyone involved with the club and we look forward to another full year of cricket – our 10th year!

Swiss Under 15 XI Tour to Cambridgeshire

A squad of eleven keen Under 15 cricketers were selected to play in Cambridge in May 2013, and while we had a couple of key players missing all the boys were up for what promised to be an exciting tour.

We started things off with a very interesting tour of Hunts County cricket batmakers. There we witnessed some history and the process of manufacturing a bat. The equipment on offer was also

far too tempting for us to resist and we were all like kids in a sweet shop and felt forced to indulge and update some of the boys equipment.

Unfortunately, Cambridge was unable to produce a fixture for the Saturday, but since a lot of

guys hadn't played any outdoor games this season, we put together two dads and lads teams which gave them a good start to the tour and some much needed practise.

The following day was a long 40-over match against Thriplow Cricket Club. We managed to get a decent session in the nets before smashing rare roast beef at The Green Man. It seemed to

work in our favour as we won the toss and elected to bat. Ruwan and Aidan opened in style and put on an 84-run partnership to start things off and keeping Pilkington, the U/17 Cambridge bowler, at bay who had torn into the openers the previous year. Aidan fell to a slower delivery off Hart and was caught at midwicket. In came Marishque, who supported Ruwan well until he too fell to a slower ball from Hart ending a 28-run partnership. All the while Ruwan continued to attack the bowlers, hitting the loose ball consistently.

Anderson. Floris came in next and gave the strike to Ruwan but was also outdone by the low bounce and given out LBW off Woods ending the 14-run partnership. Ruan came in next and tried to get his eye in but also fell victim to Pilkington’s low bouncing deliveries, which finished the 19-run partnership. The innings was not without incident when Pilkington bowled a beamer at Ruwan

who was unable to avoid the ball and got hit square in the chest, eventually getting back up

after 10 minutes. After hitting the next ball for 4 he then was dismissed for a very well played 82.

We were 150 for 6. Greg, Tom and Nic tried to restore things with Tom playing a nice little cameo innings while the others supported well and we eventually finished on 186/7 after 40 overs with Nic and Tom finishing not out.

With Ruwan out of the bowling attack, still recovering from his blow to the chest, it was Aidan and Floris who opened the bowling. Floris struck in the first ball of his second over. Both Aidan and Floris continued to restrict the openers with tight bowling and ended their opening spell of 10 overs for 34/1. In came Ale who was determined and bowled a magnificent wicket maiden. He partnered up with Ruan, who kept it tight and also took a wicket in their 8-over spell of 32/2.

Marishque and Ruwan were next. Marishque, although a little expensive in the first 2 overs, pulled it back strongly by taking the leading run scorer Pilkington’s wicket, with Ruwan cleaning up with 2 wickets, thus ending their 9-over spell with 29/3.

James was up next taking 1 wicket off the last ball of his spell. Tom then bowled extremely well and kept things very tight, and with both lads taking 1 wicket a piece they ended a very tidy spell of 15/2 in their 6 overs.

In came Greg and Will to finish things off with Greg taking a wicket and Will keeping it very tidy. They finished a 7-over spell of 20/1.

We eventually won by 53 runs, restricting them to 133, which all in all was a very good team effort against some strong opposition, and a great BBQ to round off the evening was a welcome treat.

The following day we woke up to very gloomy and bowler-friendly conditions. Cambridge county gave us a hard pill to swallow by winning the toss and putting us into bat. We lost both openers very early only to see Marishque putting up a fight and scoring a fantastic 26 while regularly losing partners at the other end. We were all bowled out very cheaply. It was just not our day and while we started off bowling really well we just couldn’t hold the catches nor did we have enough runs on the board to defend.

No doubt the lads were a little overwhelmed playing against Cambridge county and succumbed to the pressure as so often happens in the game of cricket. We will be back next year to show Cambridge how good we really are. I am sure all the lads enjoyed and gained a great experience playing against some really tough opposition. 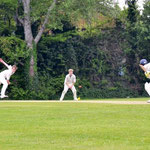 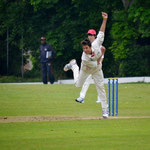 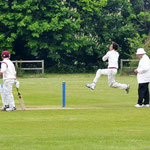 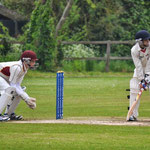 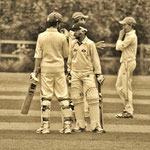 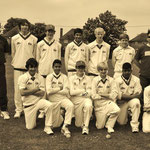